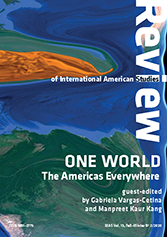 This issue of RIAS is based on the notion that, as people say in Spanish, “el mundo es un pañuelo” (“the world is a handkerchief”). This saying alludes to the fact that the world is crisscrossed by relations between people and between ideas, and everyone is connected to everyone else around the world through a few people in between. Thinking this way, it would be very difficult to isolate what is precisely ‘American,’ what is ‘European’ or ‘Asian’ in our world today. What we see here in all the essays is that ideas underpinning the same type of cultural development have been similar around the world through the decades because of the constant movement of people, things and ideas. From the articles collected here we see that it was as early as in the 1800s that many cultural movements were already based on general tenets that trespassed local, regional and national borders—and that they developed at an increasingly rapid pace. During the 1800s and the 1900s what we have come to take for granted as dance, literature, sciences, and even ‘outer space’ were in the process of being consolidated as recognizable fields of human endeavor. This happened, as the papers here show, out of a cross-fertilization among different realms of human life, and across continents. The Americas are now integral part of everywhere and, just as much, literally everywhere, in the form of people, animals, viruses, cultures, and even soils and sands coming in, has found its way and made its home in the Americas [...]. (Read more in Gabriela Vargas-Cetina and Manpreet Kaur Kang's "Introduction")

Translocality/Methodology. The Americas, or Experiencing the World

Bharatanatyam as a Transnational and Translocal Connection: A Study of Selected Indian and American Texts

‘Higher Laws’ and ‘Divine Madness’: Transnational and Translocal Configurations of Quixotic In/Sanity in the American Renaissance

Food, Technology and Translocal Transformations of Taste: Industrial and Processed Food in Yucatán

A Mexican Conquest of Space? Cosmopolitanism, Cosmopolitics, and Cosmopoetics in the Mexican Space Industry

Between Suspicion and Love. Reality, Postcritique, and Euro-American Modernization (An Introduction to the Debate)

Democracy and Truth: A Short History by Sophia Rosenfeld (A Book Review)

How to Hide an Empire: A Short History of the Greater United States by Daniel Immerwahr (A Book Review)

A Worse Place Than Hell: How the Civil War Battle of Fredericksburg Changed a Nation by John Matteson (A Pre-Publication Book Review)