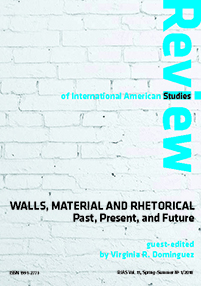 This special issue of RIAS focuses on walls. It is motivated by Donald J. Trump’s campaign promise and presidential rhetoric insisting on building a tall, strong, beautiful and effective wall between Mexico and the United States so as to keep undocumented Mexican (and Central American) people out of the United States. Of course, walls are also things used in building houses and other buildings, creating rooms within those houses and buildings, and demarcating the edges of property in both urban and rural areas. They may be tall or short, made of a multitude of materials (including wood, adobe, brick, mud, glass, and concrete), and painted or left unadorned. And they may be used to hang art or political posters. Walls have been used for thousands of years of human history, and it is often ruins of stone walls that we find in archaeological settings since they tend to survive better than roofs, wooden furniture, and textiles. But they are not the kind of walls that motivated me or the contributors of this issue of RIAS.

Clearly then, walls are not in themselves problematic. The issue is how we use them, how people and often their governments use them, and how people affected by their presence use them. In the case at hand, it is obviously the exclusionary nature of Trump’s Wall that concerns me and this issue’s contributors. Trump’s campaign rhetoric was anti-immigration, but it specifically focused on the southern border of the United States, not its northern border with Canada, which is, of course, much longer. Trump has never proposed building a wall along the US-Canadian border, although Canadian critics have in response proposed building a botanical fence all along that border. The end result, however, was that Trump’s proposed wall came across as a wall to keep Mexicans and Central Americans out of the US and it has been perceived as deeply racist. With Trump’s campaign and presidential rhetoric against allegedly untrustworthy Muslim refugees coming into the US, the proposed wall along the Rio Grande (known in Mexico as the Rio Bravo) has become a symbol of protectionism of only a part of the US population. “Make America Great Again” is and was a catchy slogan, but in practice it came across as assuming that “Americans” were neither Muslim nor Mexican or Central American in origin. Scholars and policymakers will debate whether Trump actually meant to exclude those people from the “America” he wanted to make great again, but the wall he wants to build along the southern border of the US has become symbolic of an exclusionary and particular notion of the US that many academics and US liberals decry (read more in Virginia R. Dominguez's Introduction).

Walls that Bridge; or, What We Can Learn from the Roman Walls

Fence Walls: From the Iron Curtain to the US and Hungarian Border Barriers and the Emergence of Global Walls

Fencing In and Out: Israel's Separation Wall and the Whitewashing of State Violence

To Build a Wall: Imaginaries of Identity in Yucatan, Mexico

Mending Wall? The War over History in South Korea

Wall Art and the Presence of Absence

Epilogue—Turning to the Wall: Concepts across Space and Time